Less More
1 year 2 weeks ago #760857 by Bob Brogan
Highveld Awards was created by Bob Brogan
The autumn half of the Highveld racing season is over and the time has come to recognise all the achievers.

The RA Feature Season Awards will take place on Saturday in the Aquanaut Room at Turffontein Racecourse where both the equine and human achievements during the Gauteng feature season will be revealed.

There is a different look the voting panel this year as it is made up of one handicapper and two former jockeys.

Lennon Maharaj will represent the handicappers while former champion jockey Anthony Delpech and Gunter Wrogemann are the other two members of the team.

Larry Wainstein is the non-voting chairman.

The following are the categories and nominees:

All nominees are in the running for the Champion Horse of the Season Award.

Feature season trophies are also awarded to the human achievers. These are Champion Apprentice, Champion Jockey, Champion Trainer, Champion Breeder and Champion Owner. The leading work rider is also recognised at this event.

These awards are based on performances over the Highveld season alone. In most cases points are allocated to Grade 1, Grade 2, Grade 3 and Listed races for wins and places and once these are added up, the results are then announced. They often throw out some real surprises.

Less More
1 year 2 weeks ago - 1 year 2 weeks ago #760957 by Mac
Mac on topic Highveld Awards
Champion Stayer I give to SUNSHINE SILK. The nominees for the sprinters look weak where I think to win a Highveld award one should at least be a Highveld resident with say at least two runs rather than just a raider. So I give to a very weak REBEL’s CHAMP. (Why can’t I find Rebel’s Champ’s form in Gallop?).
Otherwise,everything else much the same.

Less More
1 year 2 weeks ago #760976 by Dave Scott
Dave Scott on topic Highveld Awards
Most look cut and dry, some pics and updates would be appreciated.

The Mike de Kock stable collected the trophy for the colt’s recent feats at the Racing Association’s Features Season Awards evening at the Aquanaut Room at Turffontein on Saturday.

Hawwaam came away with two additional honours – Champion Three-Year-Old Colt/Gelding and Champion Middle-Distance Horse, while De Kock himself got the Champion Trainer gong.

Over the six months of the Highveld summer and autumn, Hawwaam ran six times for five victories and a second, with smashing performances in the SA Classic and the Premier’s Champions Challenge stamping him as a horse of true class.

The 2019 selection panel was made up of Senior Handicapper Lennon Maharaj, former champion jockey Anthony Delpech and currently indisposed rider Gunter Wrogemann. RA CEO Larry Wainstein was the non-voting chairman of the panel.

Other winners included Tilbury Fort (Champion Older Horse for his thrilling win in the G-Bets Summer Cup), Samurai Warrior (Champion Stayer for his courageous performance in the SA Derby but now sadly deceased) and Joe Gwingwhiza, who clinched the Leading Work Rider title. 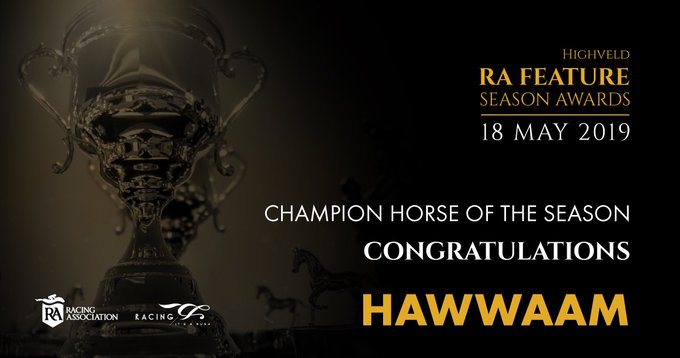